Spice up your Wedding Reception

I’ve been to about a dozen weddings in the last decade or so, and they just keep getting better and better! At one of the last weddings, there was even a photobooth and a Giant Jenga setup, which was a TONNE of fun. Ok, so let’s not take away from a few of the best parts.

Wow, what stunning brides and grooms. I mean, remember that wolf character on Disney a ways back that would say AAAWOOOOOOOOOGA, and his eyes would pop out? Yeah, that’s literally me at every wedding now. In any case, the ceremonies, 1st dance, mother and son dance, father and daughter dance, and even the speeches are a blast to be a part of.

Ok, back to the games. My mind works a million miles an hour, while my creativity and ability to build usually trail behind in trying to catch up and build. It got me thinking that what makes these reception parties unforgettable, and me ending up gut and cheeks killing me until the wee hours of the morning when the lights come on are the games that are being played at most of these weddings now.

I’ve met more wedding family, friends, and random people toppling over giant Jenga towers than most other things I get up to at weddings… besides the late night poutine bar at this last one. So here it is, la crème de la crème of ‘Best Games at Wedding Parties’ list:

Classic! Tots all the way up to grandmas and grampas play this one just the same, and is still likely one of my favorites for hanging out and meeting people at a wedding with a drink in hand. No tools needed, not complicated, just the right amount of time for 1 game not to get sucked into a game that lasts forever, and great for setting bets! I remember my last giant Jenga game I played at a wedding a few months back, there were even some hilarious rules that people made up when they yanked out certain inconspicuous planks. Brilliant! 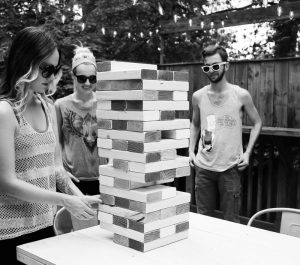 A game-changing classic, which all ages tend to want to play. Easy to pick up, toss a few bags, have a laugh, and come back to it later with another challenger. I’ve found that there’s a tonne of other really fun things you can do to spice this game up a lot. Behind the back tosses? 1-eyed, 1-legged? Behind the back, through the legs? Definitely a great addition to any wedding, and never really in need of a long and drawn out explanation of rules. 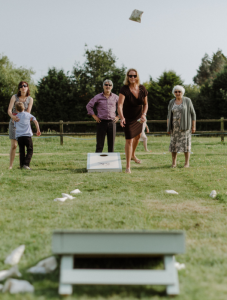 Ever been to a wedding with dollar bill betting? I have! I’ve been to a wedding that has bean bag races where betting with 1-dollar bills was on the sidelines. What a laugh! Not only that, but there was actually a bean bag race competition that was setup, where the winner won a hand-made tin foil trophe. I’m not saying that it’s the most creative game, I’m just saying that it’s the easiest game to setup, play, pack up, and get going with everyone at the wedding. On a side note, it’s phenomenal for a wedding with kids. Not many better photo opportunities! 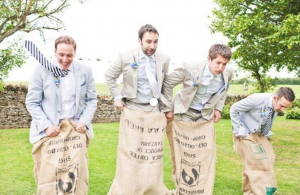 I’m pretty sure this one’s another game changer, and well worth it for weddings that have a bit of a budget to get some outstanding pics. I introduce you to….. drum roll please…… a specialized bouncy castle specifically designed to get some amazing photos. Usually I’d say to aim for one that can fit about 5-7 people on it, large enough to bounce around and off the walls, but not large enough where you end up bouncing alone because there’s just too much space. So fun! Though does take a bit of a budget usually, an attendant of some sort to make sure people aren’t going wild, and a small setup time (but easy nonetheless), go big or go home.

If you want some advice, need my opinion for a wedding event, or any event for that matter, feel free to reach out and get in touch with me. We rent giant games all around Victoria British Columbia, and have a blast meeting fun people who love to have a fun time.

Want to spice up your next wedding event? Check out some of our other games here
Scroll to top